Poll: Most Americans see US influence around the globe on the decline Nearly half of Americans think their country’s influence in the world has been diminishing in recent years, according to a new survey.

A Pew Research Center poll released on Dec. 22 found that 47% of respondents felt the United States’ influence in the world has been getting weaker in recent years, compared to just 19% who feel it is growing stronger. A little less than a third of U.S. adults, 32%, say their nation’s influence on the global stage has remained the same.

The United States was the only country of 19 surveyed by Pew where a plurality of respondents said their country’s influence is on the decline.

The poll shows that Americans are not feeling confident in their country’s leadership abroad even as President Biden has insisted, “America is back,” since he took over the White House two years ago.

Restoring respect for American leadership abroad after the Trump administration was one of Biden’s 2020 campaign promises and remains a consistent theme in his foreign policy addresses. Biden has departed from his predecessor’s “America First” approach, which U.S. allies resented at times. One of the president’s first actions in office was to rejoin the Paris climate accords and his administration sought to revive the Iran nuclear deal as well — although Biden admitted in November the deal is “dead.”

In a win for Biden, intentional public opinion of the U.S. remains positive. A Pew poll published in June found large majorities in most countries viewed America as a reliable partner and a median of 61% across 17 nations expressed a favorable view of the U.S.

But at home there are strong positive divides in how the country view’s U.S. influence abroad.

The Pew survey asked residents of 18 other countries how they felt about their nation’s influence on the global stages as well. The poll found that partisanship tinted the responses from those countries too.

“In almost every country surveyed, those who do not support the political party in power are more likely than supporters to believe that their country’s influence in the world is getting weaker,” the Pew report states.

CHINA LOOKS TO OUTFLANK US IN AFRICA AS SOMALIA FACES TERRORISM, DROUGHT AND FAMINE

Japan, the United Kingdom, and France were the three countries after the U.S. who had the largest percentages of respondents say their nation’s influence was waning.

Israel stood out in the survey as the only country where a majority (57%) said their country’s influence was growing stronger around the world.

People who are dissatisfied with the current state of their democracy were more likely to say their country’s global influence was declining. 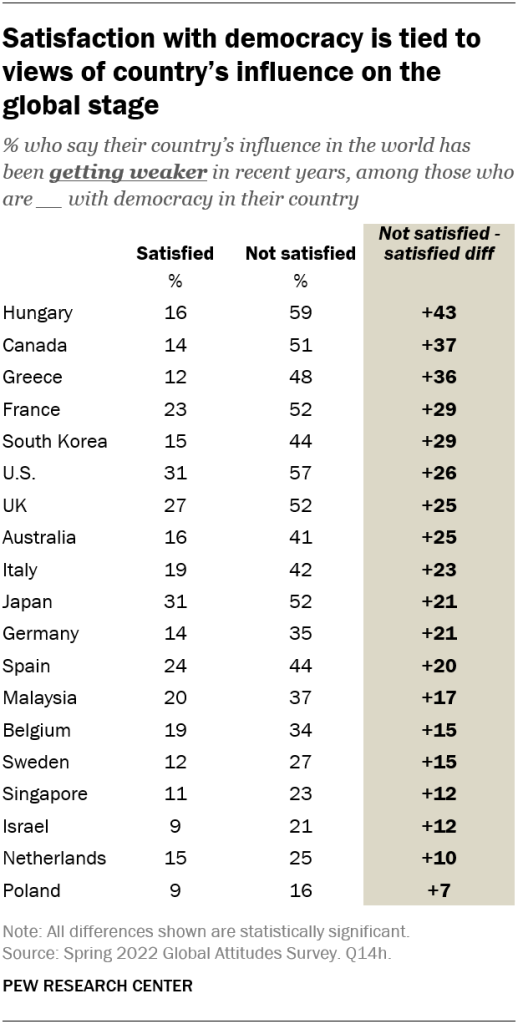 “In every country surveyed, respondents who say they are not satisfied with their democracy are more likely to think their world influence has gotten weaker in recent years,” the report said.

In Hungary, Canada, Greece, France, and South Korea, those who are dissatisfied with democracy are more likely than those who are satisfied to say their country’s global influence has become weaker in recent years by about 30 percentage points or more, the poll found.